Parish Church of Wetherby with Linton 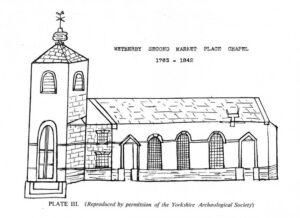 Wetherby was originally part of the ancient parish of Spofforth.

Until the second half of the nineteenth century it was served by a succession of chapels and chaplains or curates, dependent on the Rector of the mother church of Spofforth, some three miles away. There seem to have been chapels of the Knights Templars and Hospitallers in Wetherby but these would be distinct from a parochial chapel for the use of the ordinary laity. It would in such a chapel, rather than in a private oratory that Archbishop Corbridge held his visitation of 1301, “in the church or chapel of Wereby (Wetherby).”A bequest of 12d. was made in 1532“ to the chapel of Wedderby, unto our lady light” and in 1546 is mentioned a “chappell at Wetherby ii myles from parsshe church”.

In 1650 the chapel of Wetherby was stated to be of ancient erection, but having no endowment.

In the eighteenth century the curate received £30 yearly from the Rector of Spofforth, £10 from the inhabitants of Wetherby and 15s. from 3 roods of land within the township called Priest Ing.

In 1869 the nomination of the minister to serve the cure of Wetherby was vested in the Rt. Hon. Henry, Baron Leconfield (Patron of Spofforth Rectory) and his heirs, etc. Shortly afterwards a District Chapelry was assigned to the Church of St James, Wetherby (see later) and Wetherby became a new and separate ecclesiastical parish.

It seems that in 1760 an ancient and ruinous chapel which stood on the site of the present Town Hall in the Market Place was pulled down and new one built “at which time the situation was changed from East and West to North and South.” Little is known of this earlier chapel, but a Wetherby testator in 1617 bequeathed “to the loft buyldeinge of the chappell of Weatherby six inch boardes of two yeardes or more of length”. The chapel was thatched and had an entrance at the West end with a bell over the entrance door. The chapel was rebuilt in 1763 but there is no record of the consecration of it or its predecessor. The later chapel appears to have had galleries. It was demolished in 1845.

The Present Church of St James 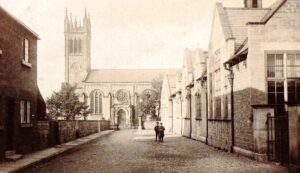 This was erected on a new site and consecrated by Dr C T Longley, Bishop of Ripon on 1 February 1842. It consists of chancel (lengthened in 1877) with organ chamber (North) and vestry (South), a spacious nave of one open space with South porch and a Western tower – the latter formerly having large pinnacles which were reduced in 1939.

The tower arch dates from 1887-8. The windows are mostly triple lancet under semi-circular arches but there is a circular window above the porch, the East window of the chancel has an impressive series of five lancets.

On 1 February 1942 a Centenary Thanksgiving Service was held with a sermon by the Archbishop of York (Dr Temple) and dedication of gifts by the Bishop of Ripon (Dr Lunt). The Service was attended by HRH the late Princess Royal and the late Earl of Harewood. At Evensong the Dean of Westminster (Bishop P de Labilliere) preached. An inscribed folder bears the autographs of representative clergy and laity who were present at these services.

The glass of the East window depicting Christ the Good Shepherd, the Last Supper and the Four Evangelists with their symbols, apparently dates from 1877. Early morning sunlight enhances the characters depicted in the scenes.

The West window (Christ blessing children) is in memory of Maria Sanderson (d. 22 March 1889). It is best viewed on a summer evening with sunlight streaming through the window bringing the colours to light with real poignancy.

The South window of three lights (the Good Samaritan) commemorates Henry Crossley (d. 1893) and Susannah, his wife (d. 1898) and was dedicated in 1940. The window depicts Jesus’ parable of the Good Samaritan (Luke 10: 25- 37). The central light shows the Samaritan helping the wounded man. The adjacent lights show those who passed by on the other side. The space below this window was a Lady Chapel before the alterations to the church in 1981.

The North window reads “To the Glory of God and in memory of Mary Mellor 10 December 1862 – 26 June 1938 and Walter Mellor 1 February 1859 – 28 December 1950.” The central light shows Jesus calling James and John to be “fishers of men”. The left light depicts Jesus’ baptism and a baptism in church. The right light shows Jesus and his disciples at the Last Supper and communion in church

MURAL MONUMENTS include those of three former incumbents.

The war memorial which was originally situated on the North wall was moved to the South wall during the reordering the Church and consists of a large bronze tablet inscribed with the names of 68 people of the parish who gave their lives in 1914-18. Nearby is a glass case which contains a book in which are inscribed the names of all Wetherby men and women who served in HM Forces and Merchant Navy in the 1939-45 War. This book was the work of Mr Stanley Mellor, late Clerk to the Wetherby Town Council.

Bells in The Tower

Six bells were given by Quentin Rhodes in 1845 and were recast by Taylors of Loughborough with two further bells added as a War Memorial in 1919. The bells were again recast and overhauled by Taylors in 1971.

Of the old Town Hall, bought from the Duke of York in 1789 when he left Allerton Mauleverer Hall, was installed in the Church Tower in 1845. The present Clock with North, South and West dials was supplied by W Potts & Sons of Leeds in 1920. In July 1974 the Clock was converted to automatic winding of the time side and a motor drive installed for the strike and chime.

Given in 1844 was replaced by a two manual organ in 1878 by Isacc Abbott of Leeds. This, in turn, was replaced by a two manual instrument by Laycock and Bannister of Keighley in 1974. The same organ was cleaned, overhauled and improved in 1999 by Principal Pipe Organs. In addition to Open Door Project funding, donations from individuals were made specifically for the purchase of the pipes.

Begins in 1783 (Baptisms). Marriages and burials continued to take place at Spofforth. The chapel was licensed for marriages in 1837, and burials in the new Churchyard date from 1842.

A new oil-fired hearing system was installed in 1977-78. The Church was rewired in 1974 with various remedial works carried out since including a loop system installed in 2003 and new Chancel lights in 2005.

In 1981 the Church was reordered. The scheme devised by the Church architect Ronald Sims involved major alterations with the resiting of the altar and alterations to the Sanctuary. A new wrought iron Cross, candlesticks, lecterns, balusters for the Altar rails, and the font were commissioned from Moorside Wrought Iron of Kirbymoorside,York. The hardwood bookcase was made for the Church by a local firm, Kettlewells of Boston Spa.

The interior of the Church was redecorated to complete an imaginative, attractive and adaptable building both for worship and for musical and dramatic presentations. The lighting was adapted in 1983 with wrought iron fittings in keeping with the remainder of the Church.

In the late 1990’s St James’ Church started to look towards the Church functioning in the 21st century.

On Sunday 26 October 1997 the Foundation Stone was laid by John Lyles, Esq., Lord Lieutenant of West Yorkshire in the presence of the Right Reverend David Young, Bishop of Ripon, Canon Michael Barton, Vicar, and William Powell, Esq., Honorary Lay Canon of Ripon Cathedral and former Churchwarden of Wetherby. The Churchwardens of the day were also present, as were members of the congregation of St James’ Church. 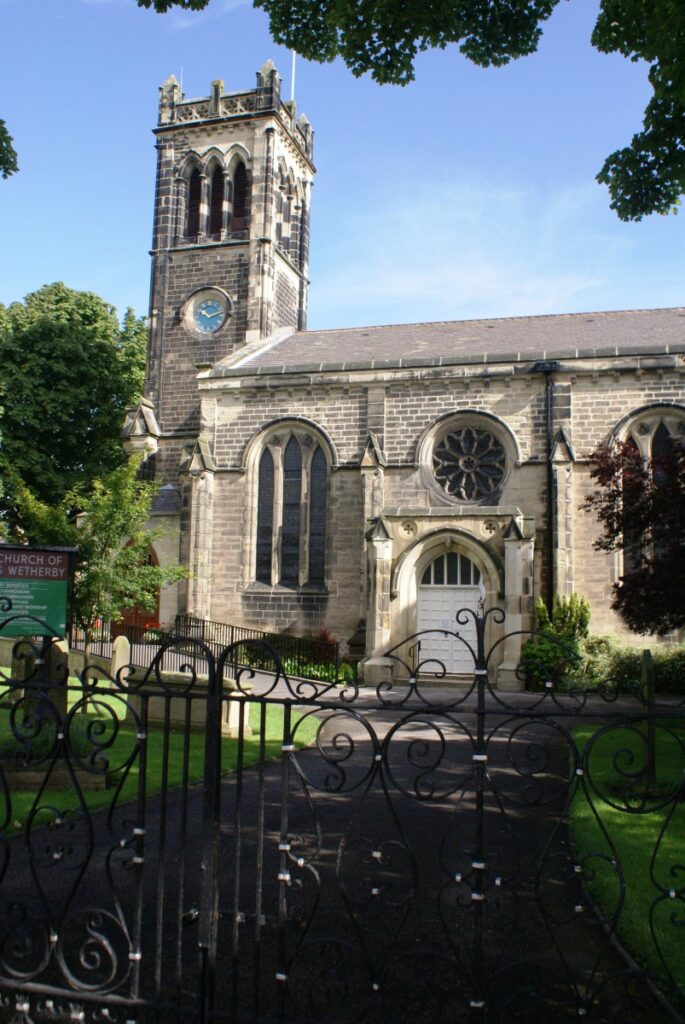 St James’ situated at ‘the heart of the community’ in Wetherby, seeks to be an all-inclusive forward thinking church, with a building fit for purpose and offering a warm welcome whatever the time of year. To that end, in October 2013, we launched the ‘Church for all Seasons’ campaign to raise the necessary funds to upgrade the central heating system, install new lighting, redecorate and re-carpet the church. This work was completed in 2016 and celebrated at a Thanksgiving Service held on 25th September 2016 attended by Bishop James Bell.

The old Chapels and the present Church of St James’, Wetherby have stood for the worship of God in Christ, the ministry of His truth and grace, in Word and Sacraments, for public and private prayer.

Further information may be obtained from the Church Archivist, Marni Roelof c/o the Parish Office (Tel: 01937 583074).